In 1977, immediately after the democratic elections that followed the death of General Franco, Spain’s parliament enacted an Amnesty Law lifting sanctions against opponents of the dictatorship and at the same time shielding officials of the regime from prosecution for human rights violations. The “Pact of Forgetting,” one of the pillars of the Transition to Democracy, enjoyed broad support for a generation. However, this began to be challenged when the Socialist Government steered the Historical Memory Act through parliament in 2007.

Spain is a state party to the major international human rights instruments including ICCPR, CESCR, CAT and the Convention and the ECHR. It became a party to the Rome Statute in 2000.

The Spanish Constitution guarantees the protection of a broad range of human rights and fundamental freedoms, including the right to life and to physical and moral integrity, prohibition of torture and inhuman or degrading punishment or treatment, the right to liberty and security, the right to honor, to personal and family privacy and equality before the law.

The Spanish Criminal Code defines crimes against humanity as set forth in the Rome Statute, enforced disappearance is hence a crime committed as part of a widespread attack against a civilian population.

In 2007, the Law on Historical Memory (Act No. 52/2007) was adopted to address crimes and atrocities committed during the Civil War and the Franco era. Furthermore, laws and judicial decisions passed during the time of the dictatorship were declared void and the right of victims to reparations was recognized.

The Law on Historical Memory requires the central government to facilitate the process of locating, exhuming and identifying victims of Francoist repression whose remains are still missing, often buried in mass graves. This state-level facilitation consists mainly of providing financial resources to local organizations such as local NGOs and academic institutions to locate and exhume mass graves. The Law on Historical Memory further provides for the administration to prepare and publish a map showing the locations of all discovered mass graves.

However, some autonomous communities have assumed responsibility for these processes, for instance Andalusia in 2003, which has led to the adoption of the Andalusian Protocol for Exhumation of Victims of the Civil War and the Post-war Period, of 2009. Similarly, Catalonia adopted a law (Act No. 10/2009) on locating and identifying disappeared persons and the honoring of mass graves.

Despite efforts to confront the past, MDP investigations are limited due to Law 46/1977 of 15 October 1977, known as the amnesty law, which remains in effect. The UN High Commissioner for Human Rights and the WGEID in its report of 2 July 2014, among others, have criticized this situation.

The Historical Memory Law facilitated the efforts of families of the missing to undertake investigations and begin the process of locating and excavating mass graves. While this may be viewed as a positive move, it has also been criticized for placing the onus on families rather than on the authorities for searching for the missing. The Law also allows regional governments to decide how much or how little support they are prepared to give families of the missing. Some regions, including the Basque Country, Catalonia and Andalucia, have been helpful, while in other regions, families and family associations have encountered bureaucratic obstacles (including being denied access to official archives).

A Map of Graves established as a result of the Historical Memory Law records 2,382 graves across the country, which are believed to contain more than 45,000 human remains. Fewer than 400 of these graves have been opened.

In the years after the Law was enacted, the Spanish authorities allocated more than 25 million Euros to the process of accounting for the missing, but funding was stopped following the change of government in 2011. The conservative government closed the Office for Victims of the Civil War and the Dictatorship in 2012, transferring its functions to an existing department in the Ministry of Justice on the grounds that the number of applications for assistance had decreased.

Other regulations and measures

Further to the Law on Historical Memory, In September 2011, the Protocol for Exhumations of Victims of the Civil War and the Dictatorship was adopted to provide a methodological guide for scientific and multidisciplinary efforts to locate and identify MDPs. Activities related to this process are carried out by non-governmental organizations under the authority of the Autonomous Community where the remains of MDPs are located.

In 2014 two UN missions visited Spain to report on the country’s efforts to address the historical legacy of missing persons.

Ariel Dulitzky, Chair of the Working Group on Enforced or Involuntary Disappearances, stressed that the search for the missing is not in the first instance a task to be carried out by families, but an obligation of the Spanish state. The Working Group sent the Spanish authorities 42 recommendations, the most urgent of which, according to Dulitzky is for “the state to assume its responsibility and draft a comprehensive policy to bring truth and justice to the victims.”

Other recommendations include providing greater government and financial support for victims’ associations and families, including the creation of a state agency to coordinate all related issues and of a national database of those who disappeared. The Working Group called on the Spanish authorities to facilitate the case brought by Judge Garzon and it identified “resistance” at the institutional level to the declassifying of certain documents, as well as obstacles placed in the way of families attempting to access essential information

The Working Group recommended that the authorities:

In July 2014 the UN Special Rapporteur on the Promotion of Truth, Justice, Reparation and Guarantee of Non-Recurrence, Pablo de Greiff, issued an assessment of the situation in Spain and urged the authorities to launch serious discussions concerning the establishment of an independent, but official, mechanism to achieve an exhaustive understanding of the human rights and humanitarian law violations that occurred during the Civil War and the Franco era. Among other things it suggested an Archive Law that would update all criteria that are applied in terms of privacy and confidentiality, in line with international standards, including the right to truth.

The Special Rapporteur warned that many Spanish officials continue to deny that a historical missing persons issue even exists, and concluded that “the strength of democratic institutions must be measured not by their ability to ignore certain issues, especially those that refer to fundamental rights, but rather by their ability to manage them effectively, however complex and awkward they may be. Reconciliation devoid of attempts to give full effect to rights, justice, reparation and guarantees of non-recurrence is invariably only an empty name that is given to a temporary stage in a process which allows the claims to live on.”

In October 2008 Judge Baltasar Garzon of the National Court authorized an investigation into the disappearance and assassination of 114,000 victims of the dictatorship between 1936 and 1952, arguing that crimes against humanity are not subject to amnesty or statute of limitations.

In addition to the figure of 114,000, around 30,000 infants are believed to have been taken from their parents (who were in some cases under sentence of death) and given to couples considered “politically reliable” by the regime. The practice of clandestine and illegal adoption continued until after the restoration of democracy.

Judge Garzon was suspended in May 2010 on disciplinary charges related to the propriety or otherwise of the October 2008 case. However, in September 2010, relatives of the missing inaugurated a similar case in Argentina, invoking universal jurisdiction in cases of crimes against humanity. On 28 November 2014 Argentine Federal Judge Maria Romilda Servini de Cubria issued warrants for the arrest of 20 former Spanish officials accused of torturing dissidents during the dictatorship. None of the indictees has so far been extradited from Spain.

Albanian speakers can learn how to use the site locator in this simple video tutorial, created by https://t.co/WsLua5cxdQ within a project implemented by @aidssh & ICMP and funded by @EUinAlbania and the Embassy of Switzerland in Albania @SwissMFA. https://t.co/xEb5P68CID

h J R
ICMP’s online Site Locator application can be used to report suspected locations of missing and disappeared persons. Reports can be made anonymously and may include mass or clandestine grave sites, or other locations. https://t.co/MItqBZ5P2K https://t.co/GOqlmG6zy9 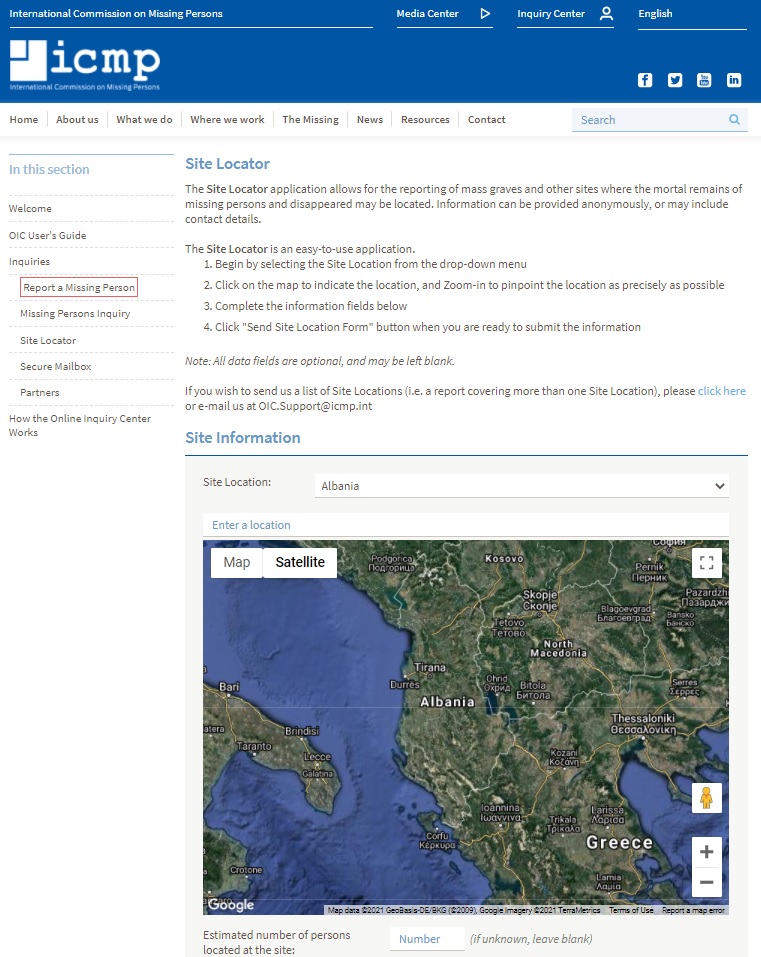 h J R
#Job: We are hiring a #Science & #Technology Officer for our #Mexico program. The position is based in #TheHague #Netherlands. More info available at: https://t.co/56xeBQIpdr

h J R
#ICMP25: Strategies #ICMP used to identify #missingpersons from the #Srebrenica genocide are now applied around the world including #Colombia, #Syria and #Iraq. Learn more at: https://t.co/pEJPkNTwLU https://t.co/s70HbVpMNP 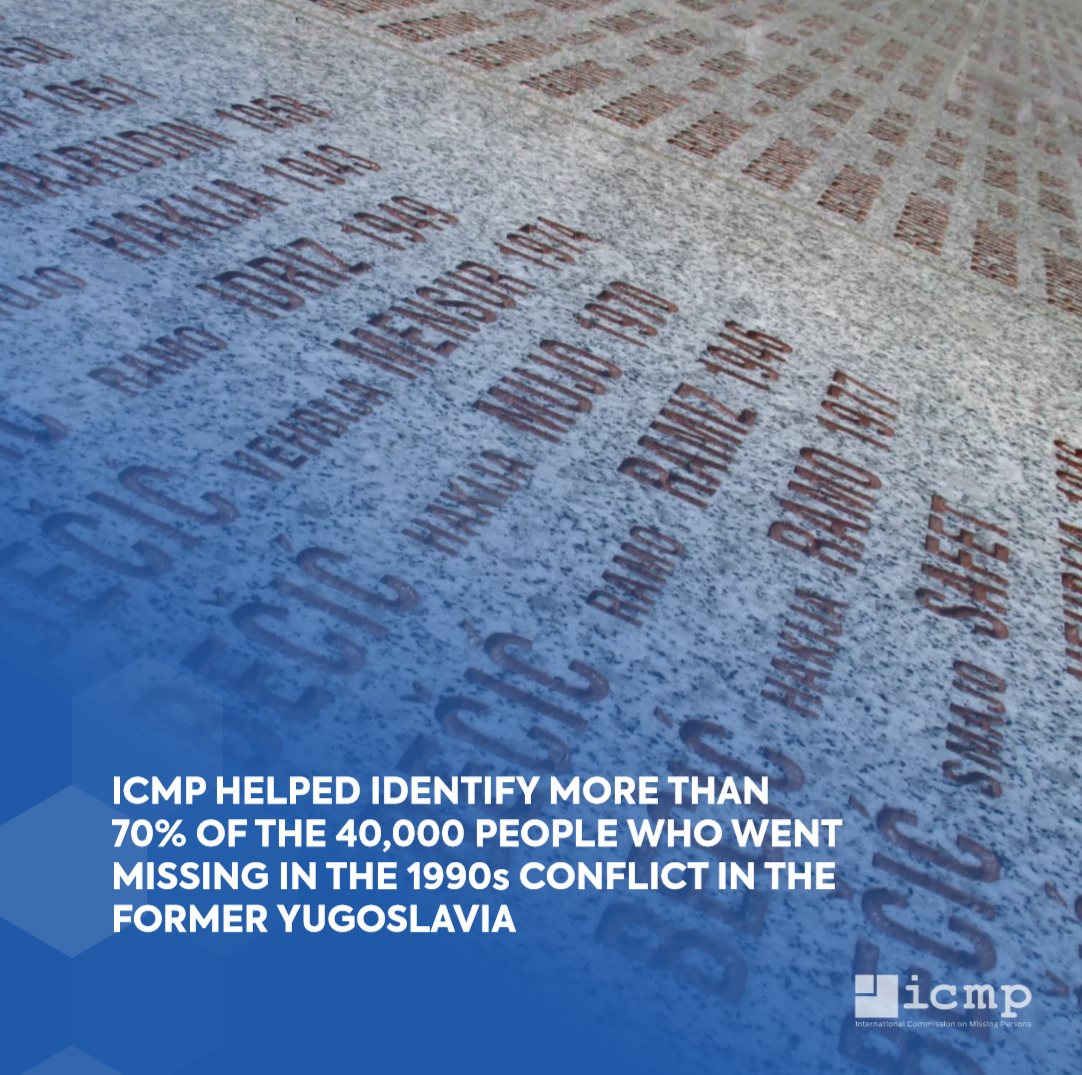