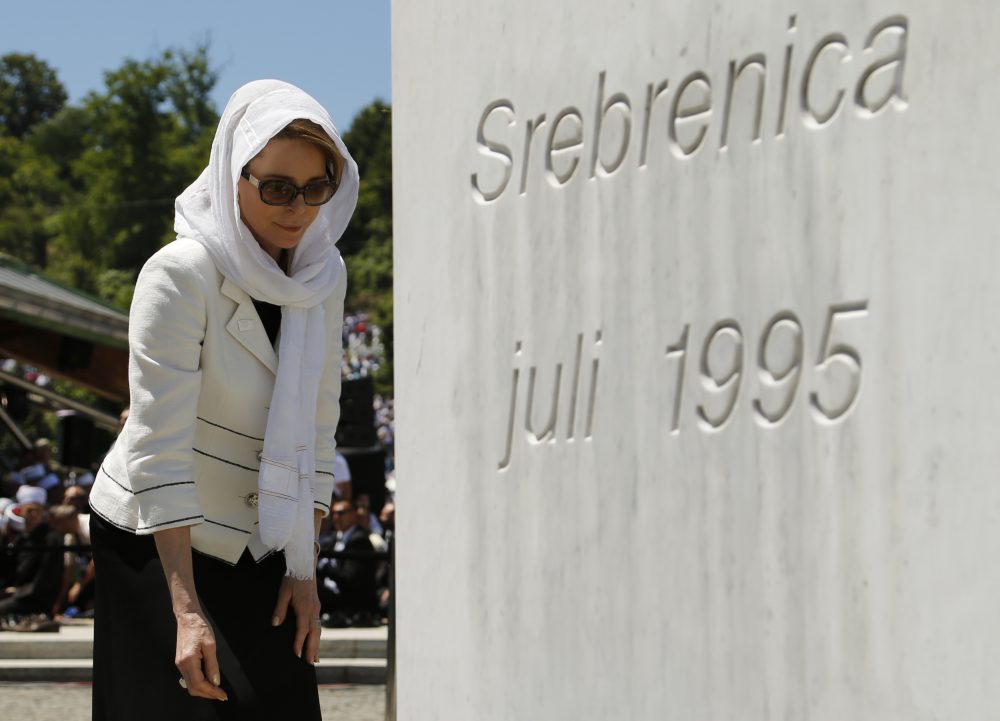 The Hague, 11 July 2017:  Twenty-two years after the Srebrenica Genocide, it is essential to uphold a transparent and truthful narrative of what happened, and to continue efforts – regardless of the time that has passed – to bring those who were responsible to justice, ICMP Director-General Kathryne Bomberger said today.

Ms Bomberger said ICMP’s role in helping Bosnia and Herzegovina to account for the estimated 30,000 persons missing from the conflict of the 1990s, including the estimated 8,000 missing from the 1995 Srebrenica genocide, has helped establish a factual account of atrocities that were committed. Today, more than 70 percent of the missing in Bosnia and Herzegovina have been accounted for, and almost 90 percent of the victims of Srebrenica have been identified through ICMP’s pioneering use of DNA.

ICMP’s decision to use DNA-based methods of identification was prompted by the extreme lengths the perpetrators of the massacre had taken to conceal their crimes.

In July 1995, Srebrenica was overrun by Bosnian Serb forces. In the days that followed, the International Criminal Tribunal for the former Yugoslavia (ICTY) has established, members of the Bosnian Serb army and police implemented a plan to kill the Bosnian Muslim men and boys above the age of 16 and expel the women, children and elderly from the town. After the completion of the mass killings in July 1995, further cover-up operations took place, including re-burials in secondary mass graves. The Tribunal found that the mass executions of men and boys from Srebrenica constituted the crime of genocide.

The robbing of graves after the massacre was based on the presumption that this would eliminate evidence of the crime. The use of mechanical diggers to move bodies made conventional methods of identification (using distinguishing physical characteristics and personal belongings, for example,) extremely difficult, since skeletons were broken up and re-buried in multiple locations. This was solved in 2000, when ICMP established a database of DNA samples provided by families of the missing and used a customized software program to compare DNA from unidentified bodies to the samples in the database. The result was an exponential rise in the number of identifications.

Because of the fragmentation and mixing of body parts in graves related to Srebrenica, the process of identifying these remains has been painstaking and meticulous. DNA matches of the same person are often found from different body parts, frequently recovered from different secondary graves. In one case, 22 DNA match reports were generated for different body parts of the same individual. These DNA matches were consistent with other evidence obtained through examination of the body parts by anthropologists and pathologists.

Many hundreds of such DNA linkages between Srebrenica graves have been documented by ICMP, providing an overall picture of how the primary mass graves and secondary mass graves relate to one another in their construction and the transport of body parts that took place in 1995.

ICMP Director-General Bomberger said the scientific certainty of DNA identification has been central to establishing a transparent and truthful narrative of what happened at Srebrenica. “Those who have been laid to rest at Potocari Cemetery in Srebrenica are the men and boys who were taken from the town in July 1995. Their bodies were buried in clandestine graves. They have been exhumed and identified over a period of more than 20 years. This is not a matter of opinion: it is a fact.”

ICMP has provided forensic evidence to the ICTY and to courts in Bosnia and Herzegovina and elsewhere in the Western Balkans. To date, a total of 20 individuals have been tried at the ICTY for crimes related to Srebrenica. Of these, 14 have been convicted. The BiH State Court has put 51 individuals on trial for crimes related to Srebrenica and 37 have been convicted.

The murder of men and boys at Srebrenica meant that women – in many cases single female heads of household – have had to face distinct challenges in a post-conflict environment. ICMP has worked to help women from Srebrenica organize and lobby effectively in order to access their legal rights to truth, justice and reparation. This is a model that ICMP uses to help family organizations throughout Bosnia and Herzegovina and in programs elsewhere in the world.

In addition to providing state-of-the-art DNA identification capacity, ICMP helped the BIH authorities to develop the Law on Missing Persons, adopted in 2004, which created a clear legal framework for securing the rights of surviving families and a legal basis for the establishment of a Fund for the Families of the Missing, and for the creation of Central Records on Missing Persons.

In 2005, ICMP helped the BIH authorities to establish the Missing Persons Institute, which is tasked with locating and identifying the missing, regardless of ethnic, religious or any other affiliation, an approach that revolutionized the way in which the search for missing persons was carried out.

Today ICMP applies the strategy it developed in Bosnia and Herzegovina throughout the world. It works with governments to develop or enhance institutional capacity to address the issue of missing persons efficiently and impartially. It helps in the drafting of legislation and other policy instruments to safeguard the rights of families of the missing, and it works to empower civil society organizations to advocate for victims’ rights. At the same time, ICMP operates the world’s leading high-throughput DNA human identification facility.

For more information on the identification of victims of the Srebrenica genocide, see http://bit.ly/2sZM3K0

ICMP is an international organization based in The Hague, the Netherlands. Its mandate is to secure the cooperation of governments and others in locating and identifying missing persons from conflict, human rights abuses, disasters, organized crime, irregular migration and other causes and to assist them in doing so. It is the only international organization tasked exclusively to work on the issue of missing persons. ICMP has spearheaded an effort of more than 20 years to account for the missing from the conflicts in former Yugoslavia.