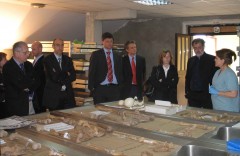 28 May 2008: The Swiss Ambassador to Bosnia and Herzegovina, H. E. Mr Rolf Lenz and ten Swiss Parliamentarians visited the facilities of the International Commission on Missing Persons today in Tuzla.
During their visit, the members of the Swiss Parliament visited two ICMP facilities dedicated to the identification of mortal remains of persons missing from the 1995 fall of Srebrenica, including the Podrinje Identification Project and the Lukavac Re-association Center.
The introduction of DNA by the ICMP as the basis for identifying large numbers of missing persons from the 1990’s conflicts in the Western Balkans enabled accurate identifications of persons who would never otherwise have been identified. Of the 8,000 estimated missing from Srebrenica, ICMP has assisted in making over 5,200 identifications. The first DNA match made by ICMP on November 16, 2001 was of a 15 year-old boy missing from Srebrenica.

The members of the Swiss Parliament commended the ICMP for its important work, aimed at providing closure for the victims’ families. “The families of the victims have a right to know the fate of their relatives. This truth, although horrible and very painful, is indeed very important. That is why Switzerland has been supporting the work of ICMP for years now, and that is why we will continue to provide support for these and other activities in this domain” said the President of the Foreign Affairs Committee, Mr. Geri Müller, member of the Swiss Parliament.
Mr. Adam Boys, ICMP Chief Operating Officer, who accompanied the Swiss delegation during their visit stated, “The Government of Switzerland has been engaged for many years in the peace and stabilization process of BiH and is a strong supporter of ICMP” “ICMP could not have existed without the political and financial support of generous governments and their openhearted citizens. I should like to thank sincerely the Government of Switzerland for their valuable support since 2001,” said Mr. Boys.
ICMP endeavors to secure the co-operation of governments and other authorities in locating and identifying persons missing as a result of armed conflicts, other hostilities or violations of human rights and to assist them in doing so. ICMP also supports the work of other organizations in their efforts, encourages public involvement in its activities and contributes to the development of appropriate expressions of commemoration and tribute to the missing.