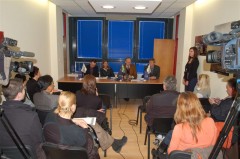 18 February 2008: The Swedish Government announced today that it will provide funds to the work of the International Commission on Missing Persons through the year 2010. The contribution of 15 Million Swedish Kronor (2.3 MUS$) from the Government of Sweden to ICMP will help them to provide assistance in locating, recovering and identifying missing persons for the next few years.
Accompanied by ICMP’s Director General Kathryne Bomberger, H.E. Ambassador Lars-Erik Wingren, the Swedish Ambassador to Bosnia and Herzegovina, visited ICMP’s main laboratory in Sarajevo where ICMP conducts DNA extraction and genetic profiling from samples of mortal remains and of blood samples from surviving relatives. Following the tour, Ambassador Wingren and Ms. Bomberger signed a donation agreement.

“I am glad to announce that the Swedish Government, through its Agency for International development, Sida, has decided to contribute to the financing of ICMP’s activities during the coming three years. All in all, the Swedish contribution amounts to 15 million SEK, which equals 3 million KM,” said the Ambassador.

In his statement he continued to comment that, “ICMP’s work has had a tremendous impact in resolving the fate of thousands of persons missing from the conflicts of the last decade. It has helped families to find out the fate of their loved ones. It has helped the courts to establish what happened. Moreover, the act of establishing the truth is very important in itself, as a necessary step towards recognition and reconciliation.”

“ICMP has also assisted BiH to establish the Missing Persons Institute which will seek to ensure the rights of family members and that the search for missing continues, regardless of nationality.” 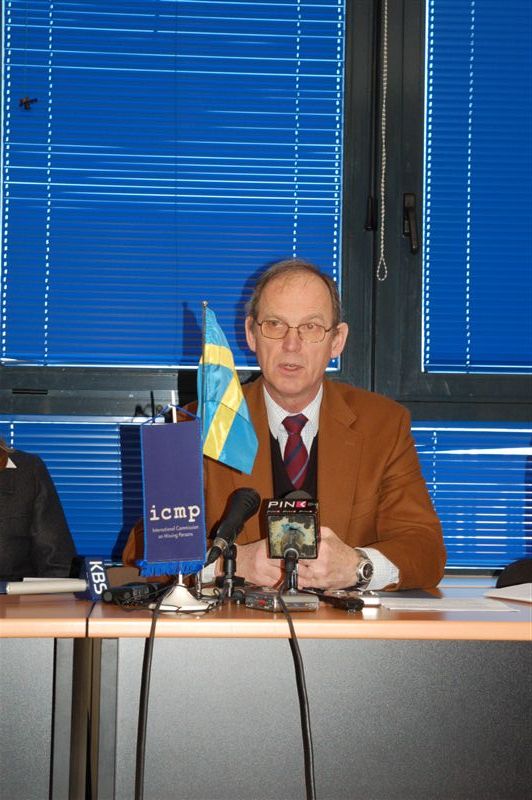 “ICMP should be proud of its achievements”, said the Ambassador. “However, Bosnia and Herzegovina should also be proud that ICMP’s new techniques have been developed here and that this country’s exceptional young people are contributing to resolving the fate of missing persons not just from this region but from conflicts and disasters throughout the world. I wish ICMP good luck in its important work”

“The Government of Sweden has consistently recognized and valued the work of ICMP. On behalf of the Commission I should like to express our immense gratitude for this generous donation, which will help to ensure that the process of clarifying the fate of the missing is continued. ICMP could not exist without the political and financial support of generous donor nations”, stated Kathryne Bomberger, Director-General of the ICMP.

In recognition of the powerful impact of ICMP’s work on some core obstacles to stability and reconciliation in the former Yugoslavia, the Swedish ambassador and then High Commissioner on National Minorities of the Organization for Security and Cooperation in Europe (OSCE), H.E Ambassador Rolf Ekéus became an ICMP Commissioner in April 2005. The importance of ICMP’s work has also been underlined by Carl Bildt, Sweden’s Foreign Minister and former High Representative to Bosnia and Herzegovina.

Of the 40,000 persons missing following the cessation of conflicts there are still about 17,500 persons unaccounted for today in the former Yugoslavia. This fact constitutes one of the main human rights issues facing BiH today. Since November 2001, ICMP has led the way in using DNA as a first step in the
process of identification. ICMP has information from 85,744 relatives of 28,460 missing people and 24,677 bone samples taken from mass graves throughout the former Yugoslavia. By matching DNA from the relatives’ blood with DNA from victims ICMP has been able to identify 13,139 missing individuals from the region including almost 11,000 from Bosnia and Herzegovina.

In addition to its technical support, ICMP is the co-founder of the Missing Persons Institute of BiH. ICMP contributes to transitional justice activities, provides legislative support and helps in the development of networks of civil society organizations which advocate for truth, justice, and for the rights of family members of missing persons.

The work of ICMP is also supported by the Governments of Canada, Denmark, Finland, France, Greece, the Holy See, Iceland, Ireland, Italy, the Netherlands, Norway, Switzerland, the United Kingdom, the United States and the European Union. The C.S. Mott Foundation provides funding to ICMP for the “Paths to Reconciliation” project.