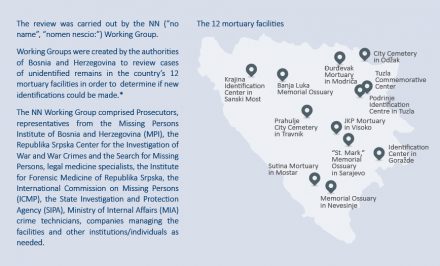 Sarajevo 10 October 2018: The International Commission on Missing Persons (ICMP) has published an infographic that highlights the work of the NN (No Name) Working Groups that were established by the BIH authorities in 2013 to investigate why it has not been possible to match the DNA profiles from more than 3,000 human remains held in mortuaries throughout the country to 8,000 reported cases of missing persons, for which families of the missing have provided sufficient reference samples.

In November 2017, following a four-year effort spearheaded by the Prosecutor’s Office of Bosnia and Herzegovina in cooperation with the BIH Missing Persons Institute (MPI) and with technical assistance from ICMP funded by the European Union, ICMP and the MPI announced the preliminary results of the project. Careful review of all remains kept in BiH mortuaries resulted in 121 new identities, 968 re-associations with previously identified cases, and recommendations to the Prosecutor regarding steps that need to be taken in order to resolve most of the remaining cases.

ICMP welcomes all activities by the prosecutors to implement these recommendations. “Implementation can bring closure to a substantial number of families who still, 20 years after the conflict, do not know the fate of a loved one,” the Head of ICMP’s Western Balkans Program, Matthew Holliday, said today, adding that “it is also important that funds allocated to mortuary facilities are used in the best possible way, and this means eliminating the cost of housing remains that can be identified and buried with dignity and respect so many years after the conflict.”

The Prosecutor’s Office of Herzegovina – Neretva Canton has made around 40 formal identifications based on newly generated DNA profiles, and matching profiles of previously identified persons. Moreover, at least 55 NN cases have been returned to judicial plots, thus reducing the number of NN remains in the Sutina mortuary in Mostar.

Through its technical assistance programs, ICMP will continue to support the work of the MPI and prosecutors’ offices to resolve the remaining NN cases.

ICMP is a treaty-based international organization with headquarters in The Hague. Its mandate is to secure the cooperation of governments and others in locating and identifying missing persons from conflict, human rights abuses, disasters, organized crime, irregular migration and other causes and to assist them in doing so. It is the only international organization tasked exclusively to work on the issue of missing persons.

The ICMP infographic on the NNWG process can be accessed at: http://bit.ly/2QAXEpS