Most of the 18 ministries from the Kurdish Regional Government and Federal Iraq that are members of the Task Force participated in the workshop, which examined the impact of the missing persons issue on families and communities, and the implementation of Iraq’s National Action Plan on UNSCR 1325. Dr Alwash, who is the Head of the Coordinating Committee on UNSCR 1325, welcomed future collaboration between the Task Force and ICMP to ensure that the missing persons issue is fully integrated in the agenda on women, peace and security.

Today’s workshop was a follow-up to a conference organized by ICMP in Baghdad on 2 May together with the US Bureau of Democracy, Human Rights and Labor to highlight the intersection between the issue of missing persons and UNSCR 1325.

A majority of those who have disappeared in Iraq are male, which means there is a disproportionate number of surviving families led by single women. Additionally, many women, particularly from minority communities such as the Yezidis, have been targeted in recent years for abduction.  Many women fear reprisals if they report a missing person. In addition, current procedures to secure rights are dependent on defining the circumstances of the disappearance of the male members of the family, thus complicating and politicizing the process. For example, even when a male missing person is presumed to be dead, access by surviving women to legal documentation, property rights, administrative rights, inheritance, custody, and compensation is hindered by legal and political obstacles.

During today’s workshop, ICMP and the Task Force presented their respective mandates, explored  key shared areas of concern, and agreed to work together to include missing persons in the National Action Plan.

ICMP is a treaty-based international organization with headquarters in The Hague. Its mandate is to secure the cooperation of governments and others in locating and identifying missing persons from conflict, human rights abuses, disasters, organized crime, irregular migration and other causes and to assist them in doing so. It is the only international organization tasked exclusively to work on the issue of missing persons. ICMP has been working in Iraq since 2003. 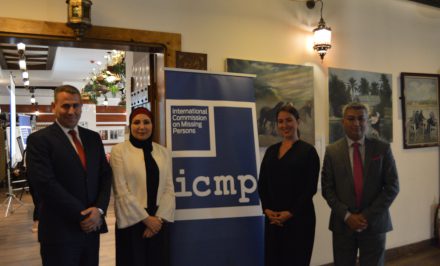