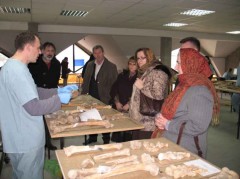 12 February 2008: Representatives of the Missing Persons Institute for Bosnia and Herzegovina (MPI), including the chair of the Steering Board, Ms. Jasminka Dzumhur and Steering Board members Ivo Jurcevic, Dusan Sehovac and Jadranka Durakovic; MPI Advisory Board members, Munira Subašić, Ahmet Grahić and Zvonimir Kubinek along with Sesenam Cosic, Head of the War Crimes Unit of the Tuzla Cantonal Prosecutors Office, visited the facilities of the International Commission on Missing Persons (ICMP) in Tuzla on Monday.

Accompanied by ICMP’s Government Relations Coordinator, Klaudia Kuljuh, they visited ICMP’s Podrinje Identification Project (PIP), where mortal remains from the 1995 fall of Srebrenica are stored and identified, ICMP’s Identification Coordination Division (ICD), where all blood samples collected by ICMP from relatives of the missing and all bone samples received from government authorities are archived and sent to ICMP labs for testing, and the Lukavac Re-association Center (LKRC) where ICMP’s experts combine DNA technology and anthropological analysis to re-associate skeletal remains exhumed from secondary mass graves associated with the fall of Srebrenica.