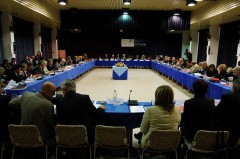 27 October 2007: The International Commission on Missing Persons (ICMP) hosted a conference in Novi Vinodolski, Republic of Croatia, where representatives of associations of families of missing persons and representatives from relevant government institutions from the region met together for three days to discuss issues pertinent to determining the fate of missing persons from the armed conflicts of the 1990’s in South Eastern Europe.

ICMP hosted this three day conference in coordination with family associations from the various regions affected by the conflicts”There are still over 17,500 persons missing from the various armed conflicts that took place during the 1990’s. This fact constitutes one of the biggest human rights issues facing the countries of southeast Europe today,” said Ms. Kathryne Bomberger, the Director-General of ICMP. “This forum allows family members with missing relatives to exert their right to advocate for information and to discuss these issues directly with authorities responsible for working on this issue,” she added.