Pristina, 28 April 2017: ICMP presented its third Kosovo Stocktaking Report this morning at a press conference in Pristina. The previous Stocktaking Reports were published in 2005 and 2010. The report provides a detailed account of progress in accounting for those who went missing during the conflict, together with recommendations on how more progress can be made.

In the 17 years since the end of the conflict, more than 6,000 cases of human remains have been recovered on the territory of Kosovo, and almost 900 on the territory of Serbia. Since 2002, more than 2,500 missing persons cases have been resolved through the use of effective forensic work, including DNA testing. Approximately 2,000 cases were identified by traditional methods, including visual identifications prior to 2002. Today, the number of missing persons is estimated to be over 1,600 persons.

Survivors and families of the missing “stand together in demanding that all cases of missing persons are properly investigated and that answers are given to the almost 10,000 surviving families who still have no information on the fate and circumstances of the disappearance of their missing loved ones,” the Head of ICMP’s Western Balkans Program, Mathew Holliday, said during today’s presentation. He said it was critical that the authorities in Belgrade and Pristina “find more robust avenues for cooperation and for resolving the remaining cases and that they are committed to securing the rights of the families of the missing to truth, justice and reparations, regardless of their ethnic, religious or national origin, or the role of the missing person during the conflict.”

One of the challenges that must be addressed, Holliday said, is to resolve the issue of up to 400 sets of unidentified remains in Pristina Mortuary, which may be the result of mis-identifications in 1999 and 2000, before DNA testing was introduced as the primary means of human identification.

The collection of additional genetic reference samples from family members who identified their missing through traditional means, i.e. without the assistance of DNA, may make it possible to resolve a substantial number of cases in Pristina Mortuary and provide explicit direction to target and address mis-identifications, Holliday said.

ICMP’s engagement in Kosovo began in 1999 and focused on building domestic capacity to account for missing persons in a reliable manner. It has focused on ensuring that transparency and human rights standards are fully applied, and it has helped to create and strengthen domestic institutions that have been responsible for the issue of missing persons in both Serbia and Kosovo. ICMP has supported efforts to improve dialogue between Belgrade and Pristina and has worked to promote the capacity of the Kosovo Commission on Missing Persons since it was established in 2006. In parallel, it has strengthened the engagement of families of missing persons as a key element in the process, helping them to access their rights and hold the authorities to account. Since 2001, ICMP has also provided technical assistance to the Government of Serbia in locating, recovering and identifying persons missing from the Kosovo conflict. In 2003, ICMP signed an agreement with UNMIK to assist with DNA-based identifications and since December 2008 ICMP has assisted the European Union Rule of Law Mission (EULEX) with the provision of DNA testing and matching for the purposes of identification of missing persons.

h J R
@UKforSyria: On the #InternationalDayOfPeace the 🇬🇧 echoes @TheICMP's calls for locating all #missingpersons & investigating the circumstances of their disappearance in Syria & around the🌎. Accounting for the missing is an investment in #peace https://t.co/UFSLpIb3vF

h J R
On the International Day of Peace, #ICMP calls on States to uphold their responsibility to locate all #missingpersons and investigate the circumstances of their disappearance regardless of ethnic, religious or national background. #PeaceDay https://t.co/GVzYEnSAj6 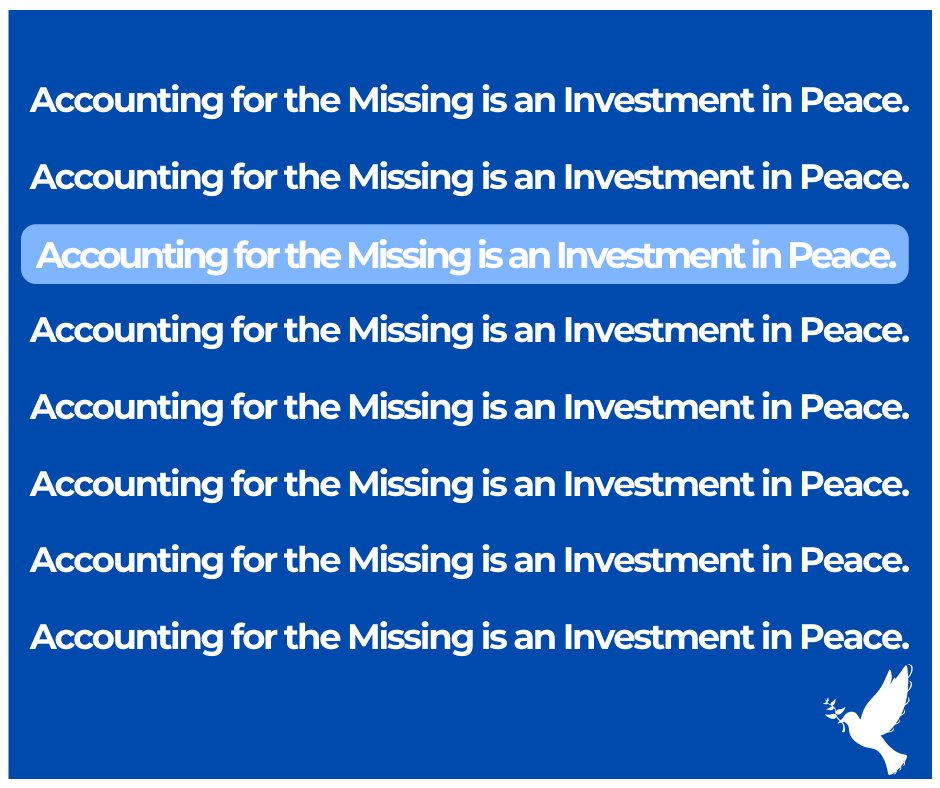