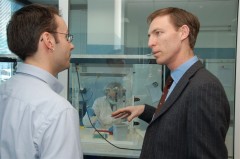 19 March 2008: During his visit to Bosnia and Herzegovina, the United Kingdom Minister for Europe, Mr. Jim Murphy visited the DNA Laboratory and offices of the International Commission on Missing Persons (ICMP) in Sarajevo today.

Accompanied by ICMP’s Chief Operating Officer, Mr. Adam Boys, and the British Ambassador to Bosnia and Herzegovina, H.E. Mr. Matthew Rycroft, the Minister toured the laboratory in Sarajevo where ICMP performs DNA extraction and genetic profiling of samples from mortal remains and of blood samples from surviving relatives.

“It is clear that ICMP’s DNA-led identification system is a powerful tool to enable family members of the missing to achieve a sense of closure as well as contributing to overall reconciliation and stability in this region. I am fascinated and impressed by ICMP’s professional approach to resolving this important issue. The expertise that has been developed by ICMP here is of great use and value not only to this country and to the region, but also to all countries where there has been catastrophic loss of live as a result of war or natural disaster”, said Mr. Murphy and added “I will never forget what I’ve seen today”.

“It is our main goal to end the anguish and uncertainty of the thousands of families who still do not know what happened to their loved ones and achieving this would not be possible without the active involvement and financial support that the British and other governments have so generously given to resolve the fate of the missing”, stated Mr. Boys.

The United Kingdom has supported ICMP since year 2000 with grants that have focused on the exhumations’ process and developing Bosnia’s own capacity to address the missing persons issue at the level of the state.

In addition to its technical support in the identification process, ICMP is the co-founder of the Missing Persons Institute of BiH. ICMP contributes to transitional justice activities, provides legislative support and helps in the development of networks of civil society organizations which advocate for truth, justice, and for the rights of family members of missing persons.

Of the 40,000 persons missing following the cessation of conflicts there are still some 17,500 persons unaccounted for today in the former Yugoslavia, out of approximately 13,500 are missing from Bosnia and Herzegovina. The missing persons problem is therefore one of the main human rights issues facing BiH today. Since November 2001, ICMP has led the way in using DNA as the first step in the process of identification. ICMP has information from 85,853 relatives of 28,495 missing people and 25,458 bone samples taken from mass graves throughout the former Yugoslavia. By matching DNA from relatives’ blood with the DNA of victims ICMP has identified 13,381 missing individuals from the region and over 800 victims of the 2004 Asian tsunami.