Kada Hotic from Srebrenica in eastern Bosnia, and Smilja Mitrovic from Bijeljina in the northeastern part of the country lost family members in the 1992-95 conflict. Their circumstances were different but for more than two decades, they have been engaged in the same struggle – to find out the fate of their loved ones and to secure justice for survivors.

Kada Hotic lost fifty members of her extended family in the Srebrenica Genocide, including her husband, her son, her two brothers and her brother-in-law. 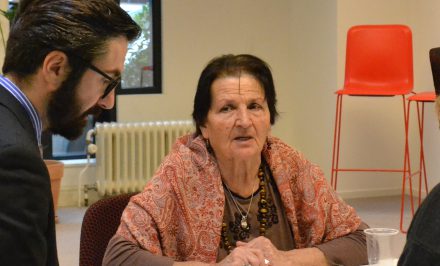 Kada is the Vice President of the Mothers of Srebrenica Association. Dynamic and forthright, she says she became involved in the association as a way of coping with grief. “I’m working to ensure that what happened is not forgotten, and helping others too. While I have life, I will do everything in my power to tell the truth to those who will listen.”

Originally, there were proposals to locate the Memorial in a different part of Bosnia and Herzegovina. The Mothers of Srebrenica and others insisted that it be located in Potocari, the district on the edge of Srebrenica, where the town’s inhabitants sought refuge at the end of the siege and where men and boys were separated from women and taken away by Serb soldiers.

“Imagine if the memorial wasn’t in Srebrenica,” Kada says. “It would give an argument to the deniers. History starts to be written the moment it happens, and we knew that it was important for the memorial to be placed where these things happened.”

Kada also points to the role of survivors’ associations in campaigning for the Podrinje Identification Project (PIP) to be established in 1999 so that human remains recovered from mass graves in the Srebrenica region could be stored with dignity ahead of identification. Located in Tuzla, the PIP conducts human remains analysis and DNA sampling, and coordinates the identification process for missing persons from Srebrenica. In 2010, ICMP handed over the management of the PIP to the Missing Persons Institute of Bosnia and Herzegovina and the Tuzla municipal government. 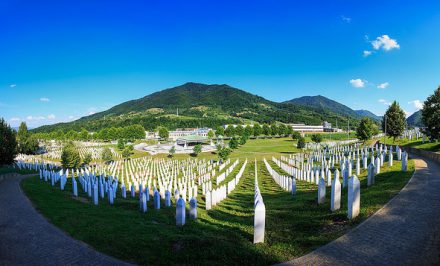 Kada attributes the effectiveness of lobbying by survivors in Bosnia and Herzegovina to persistence and pragmatism. “To establish the Potocari Memorial Center we needed a Foundation. I suggested to Paddy Ashdown, who was High Representative for Bosnia and Herzegovina, that he lead. I told him it’s your authority that we want to use. You can raise funds. There isn’t an idea that can be turned into reality without funds.”

Ashdown spearheaded the successful effort, initiated by his predecessor, Wolfgang Petritsch, to establish the memorial.

“At one point, they tried to impose the way the Memorial was to look,” Kada recalls. “But I told them this wasn’t a good idea.” She said the family representatives wanted the Memorial to reflect the religious customs of the people buried there. “I like to be heard. I’m quite loud. We were very clear about what we wanted.”

Kada was one of a group of family representatives from Bosnia and Herzegovina who visited The Hague in November to see the new DNA laboratory system.

“ICMP is the greatest gift we could have had,” she says. “With ICMP, we’ve literally uncovered the truth about genocide and the truth cannot be denied. We are grateful to ICMP because it helped us to unearth the truth.”

Kada’s family members were identified using DNA. “Of my son’s remains I only have three small bones,” she says. “Imagine when I think of these things and he’s my child.” She adds that her husband’s remains were found with gunshot wounds. “He had a silver pocket watch and a bullet went through the watch and at half past four the watch stopped working. I believe that’s when his heart stopped.”

Her own story testifies to the violence that was inflicted on Bosnia and Herzegovina during the twentieth century. Her father, serving with Marshall Tito’s Partisans, disappeared at the very end of the Second World War in the fighting that accompanied the German retreat from former Yugoslavia. “He disappeared just before I was born,” she says. “He was never found.”

Kada believes that genocide deniers “know that genocide was committed but are afraid of their own responsibility”. By acknowledging the historical truth of genocide, they will be obliged to acknowledge that the crime was perpetrated through a command and logistical chain that involved large numbers of people.

She has no doubt that criminal proceedings to try war crimes are an indispensable element in addressing the legacy of conflict. Speaking just before the International Criminal Tribunal for the former Yugoslavia (ICTY) delivered its verdict in the case against Ratko Mladic, she stressed the importance of the ICTY. “It has helped to show the truth. Before Mladic entered Srebrenica, all of those white headstones were living people.”

Smilja Mitrovic’s son, Dragan, had just been offered a place at university to study International Trade when he was called up for military service in the final months of the war in Bosnia and Herzegovina. He disappeared in September 1995 after his unit had surrendered.

“My son was 18 years old. He had been drafted into the army. He couldn’t continue to study until he finished in the army,” Smilja says. “I saw him on 24 August, and then on 13 September he was reported missing.”

Smilja is the President of the Association of Families of Missing Soldiers and Civilians of Semberija and Majevica. She has spent the last 22 years looking for her son and working with other families to help them account for missing persons.

After he was captured, Dragan was filmed with other prisoners in a news item that appeared on Croatian TV, but none of the details recorded in the film resulted in clarification of the circumstances in which he disappeared.

“They were not active combatants anymore,” Smilja says. “The area where he was deployed had surrendered. At first, we didn’t get any information from the military or from the authorities. And then, when they told us our son was missing, I just couldn’t understand. I wasn’t able to absorb this information. We went looking for him. My husband and I on one occasion took the car through the mountains and the forest. We spent five days on our own there. We didn’t want to accept that our Dragan was gone. After we came home, I spent several months completely withdrawn. I didn’t want to live. But then I started getting in touch with other families. The first step was to organize ourselves. The government was saying that the soldiers were still alive, but nothing materialized. It was when I realized that the authorities weren’t interested enough to find our relatives that I stepped forward and took the lead with other families. That’s when we started to be very active. ”

Unhappy with the official response to the missing persons issue, Smilja and others began to organize protests. “The most intensive civil society activity was when ICMP and the ICRC came in and we started to work with Bosniak and Croat associations of missing persons and then we started writing to the authorities and lobbying for our rights,” she says.

Smilja points to the introduction of mass DNA identification as a significant advance, along with the eventual acceptance by the authorities of the legal rights of survivors. “First of all, ICMP enabled us to have DNA identification. Secondly, we started working on the rights of families so that they would receive some kind of support,” she says. “The rights of families of missing persons were introduced into law. They saw how we persisted and they had to accept that.”

In 2000, aged just forty-five, Smilja’s husband died of a heart attack. “It was too much for him,” she says. “Now it’s up to me. Despite all these advances the pain remains. The greatest difficulty is that family members are getting older and dying. My greatest fear – I couldn’t bear this – is that something happens to me before I have found my son’s remains. I won’t give up.”

Smilja believes the judicial process is necessary, and she points out that in addition to the crime itself, the issue of withholding information about enforced disappearance needs to be addressed. “I think it’s a crime to hide information. I think the fate of my son is hidden from me. Bosnia is a small country and I can’t believe that 22 years after the war we still don’t know.”

PROFILES OF THE MISSING is part of a global discussion forum convened by the International Commission on Missing Persons (ICMP), bringing together policymakers, legal experts, academics, civil society activists and others to share experiences and best practice in developing institutional, societal and technical solutions to address the global challenge of missing and disappeared persons.