11 September 2020 – An online exhibit featuring films, brochures and other material created by Syrian civil society organizations underlines the legal rights of families of the missing.

The 11 organizations created the materials using grants provided by the International Commission on Missing Persons (ICMP) and financed by the European Union with the purpose of advancing the influence and independence of Civil Society in efforts to secure the rights of Syrian families with missing relatives. They use the material in their advocacy efforts, including to raise awareness among families of missing Syrians about their rights and their role in the search for the missing.

“The more vocal we are about the issue, the more others understand our suffering,” said Hala Al Ghawi, a physician who co-founded the organization Syria Bright Future, which created film about its work as part of the project. “Truth and justice will only be achieved with the meaningful participation of the families of the missing.”

Lena Alhusseini, head of the ICMP’s Syria/MENA Program, said that the support to the Civil Society Organizations aimed to help them strengthen their capacity to influence a future missing persons process in Syria, and to advocate for their rights to justice, truth and reparations.

“ICMP experience shows that families of the missing are central to any effort to account for missing persons. A future Syrian process will benefit from a competent and active civil society that is continuously growing stronger,” she said.

Estimates cited by the UN in 2019 indicate that over 100,000 persons are missing as a result of the current conflict in Syria. In addition, the country has a legacy of missing and disappeared persons cases linked to human rights abuses and other causes that occurred prior to the conflict. Syrians who have fled the fighting have also gone missing along migratory routes.

ICMP’s Syria/MENA Program works to establish the foundations for an effective process to address the issue of missing persons. The program places the rights of families of the missing at the center of the effort to account for their relatives, regardless of the circumstances of the missing person, their ethnic, or religious background, or their role in the conflict. The Program, which is financially supported by the European Union, is being implemented among refugees and along migratory routes. 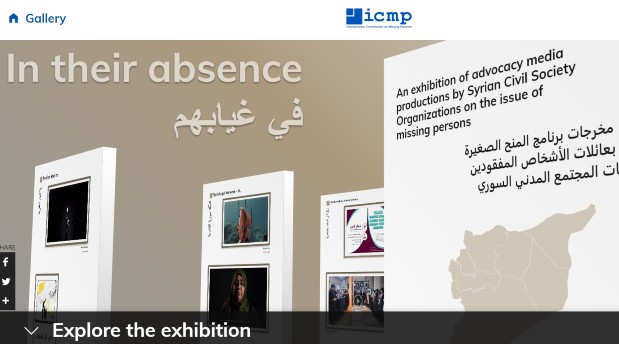 In Their Absence is an online exhibit that collects the works of 11 Syrian Civil Society Organizations. Illustration

ICMP is a treaty-based international organization with Headquarters in The Hague, the Netherlands that works to secure the cooperation of governments and others in locating missing persons from conflict, human rights abuses, disasters, organized crime, migratory routes and other causes and to assist them in doing so. Contact ICMP

The following organizations took part in the project:

Damma is a women-led organization that was originally founded in Zabadani in Syria before moving to Beqaa, Lebanon. Damma supports vulnerable communities, especially women and children, through legal and economic empowerment.

Nophotozone, operating from Beirut, Lebanon, focuses on the issue of detention and enforced disappearance in Syria and provides legal aid and support to families of the missing.

Amal Healing and Advocacy Center was established in 2014 in Hatay, Turkey, to the protect women and children. AHAC provides psychosocial support, legal counselling and advocacy for the cause of missing persons.

Syria Bright Future was established in 2013 Gaziantep, Turkey to provide psychosocial support and empower women who have been recently released from detention.

Freedom Jasmine is a Syrian non-profit organization based in Gaziantep, Turkey, that focuses on the issue of missing persons. Freedom Jasmine advocates through campaigns for the cause in regional and international platforms.

Horizon, based in Sanliurfa, Turkey, supports development and employment projects to benefit Syrians who live in Sanliurfa.

Judy Organization for Relief and Development

The Judy Organization for Relief and Development (JORD), an independent local non-profit organization, was founded in 2012 to work in the field of humanitarian relief and refugee support in the Kurdistan Region in Iraq.

The Hitma Organization for Cultural and Social Development, based in Erbil, the Kurdistan Region in Iraq, was established by a group of Syrian volunteers in 2012 to focus on youth and volunteer development.

The Syria Legal Network (SLN), based in Amsterdam, the Netherlands, is a network of lawyers founded in 2016 to provide legal support to Syrian communities in the Netherlands and Europe.

The Paris, France-based Violations Documentation Center in Syria (VDC), part of the Syrian Center for Media and Freedom of Expression, in 2011 begun documenting violations of human rights and international humanitarian law in Syria.

Al Share’ Media Foundation, based in Berlin, Germany, is a collective of journalists, artists, filmmakers and human rights defenders who work to promote freedom of expression.

#ICMP DG @KatBomberger met today with the Head of the War Crimes Department of #Ukraine's Prosecutor General’s Office, Yuriy Byelousov. Concrete steps on locating tens of thousands of #missingpersons from the war and investigating their disappearances were discussed. @GP_Ukraine https://t.co/9oY00vw68Q