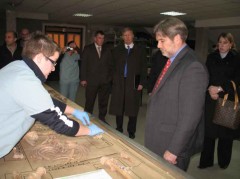 During his first visit to the facilities of the International Commission on Missing Persons (ICMP) in Tuzla today, the US Ambassador to Bosnia and Herzegovina, H.E. Charles L. English said that the work of ICMP is critical to the process of justice and reconciliation in Bosnia and Herzegovina, as well as other parts of the region affected by the conflicts of the 1990's.

Accompanied by ICMP Director-General, Kathryne Bomberger, the ambassador visited ICMP's center where all blood reference samples are collected by ICMP from relatives of the missing and all bone samples received from government authorities are processed. After being bar coded they are sent to ICMP laboratories in Sarajevo and Banja Luka for DNA analysis. Once extracted, the DNA profiles are entered into ICMP's database and matched. The ambassador also visited the Podrinje Identification Project (PIP), which was specifically created to assist in the identification of persons missing from the 1995 fall of Srebrenica.

“It is my somber privilege to be here to see first hand the important work being done by the International Commission on Missing Persons. I use the term somber, because such a Commission should never have to exist. But the horrors of the 1992-1995 war here have necessitated its existence. I commend the Commission on their outstanding efforts to provide closure to the families of all the victims,” English said following his visit to ICMP's Identification Coordination Division (ICD) in Tuzla. “For families, the value of finally knowing the fate of their relatives, no matter how painful, is immensely important”.

“Without the initiative and foresight of the US Government, there would be no ICMP today. ICMP is an international commission that was created at the behest of the US Government in 1996 and we are grateful to the United States for the immense financial and political support it has provided to ICMP since the beginning of its work. Without their continued support, as well as the support of other ICMP donor countries, our work would be impossible”, Bomberger said.

ICMP assists governments in the process of locating, recovering and identifying missing persons through the use of forensic archaeology, anthropology and DNA science. ICMP made its first DNA match on November 16, 2001 and till today over 13,000 different individuals were identified, of which over 10,000 are from Bosnia and Herzegovina and over 5,000 from the 1995 fall of Srebrenica. ICMP provides policy assistance to governments in the establishment of appropriate laws and mechanisms to address the missing persons issue and it strengthens the ability of civil society groups and family members of victims to engage in this important humanitarian and human rights issue.

The work of ICMP is supported by the Governments of Canada, Denmark, Finland, France, Switzerland, Greece, Germany, the Holy See, Iceland, Ireland, Italy, the Netherlands, Norway, Poland, Sweden, the United Kingdom, the United States and the European Union. The C.S. Mott Foundation provides funding to ICMP for the “Paths to Reconciliation” project.

Family associations & movements led by mothers of the disappeared are at the forefront of activism regarding #missingpersons. #SyrianWomen play an important role in advocating for missing & #disappeared Syrians, through the Syrian women-led organizations. #OrangeTheWorld #16Days https://t.co/0rYm2R5qFE

h J R
#Women have developed agency & resilience in the context of the phenomenon of #disappearance. Women #humanrights defenders have played a key role in the enactment of legislation relating to violence against women, among other matters. #missingpersons #OrangeTheWorld #16Days https://t.co/qdlsGPzzYO