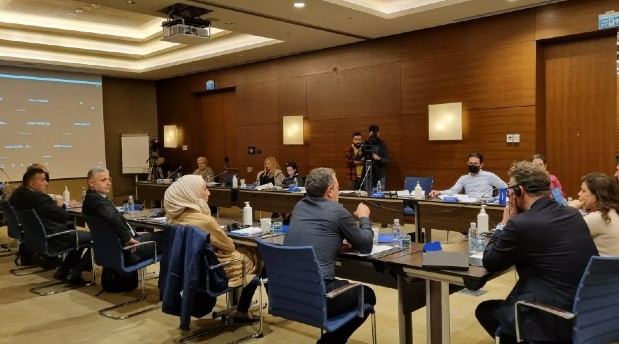 The Hague, 28 January 2022: At its 7th meeting today, the Policy Coordination Group (PCG), a Syrian-led initiative on the missing and disappeared facilitated by the International Commission on Missing Persons (ICMP), discussed a draft Missing Persons Law drafted by the PCG, that can enable a sustainable and just process to account for the missing in Syria.

The law provides for systematic steps that are necessary to account for missing persons; it also stipulates measures to uphold the rights of families of the missing and ensure that they receive material and moral support.

More than 130,000 persons are estimated to be missing in Syria as a result of the conflict. In addition, the country has a legacy of missing and disappeared persons cases linked to human rights abuses and other causes prior to the conflict, and thousands of Syrians who have fled the fighting have gone missing along migratory routes.

Today’s online discussion follows the adoption of a set of Constitutional Principles on Syria’s Missing and Disappeared at the sixth session of the PCG, held via Zoom in December 2021.

“The proposed legislation will help protect the rights of missing persons, survivors, and their families,” said the Head of ICMP’s Syria/MENA Program Lena Alhusseini. “Legislation consistent with international standards must be put in place and reinforced by appropriate regulations.”

ICMP’s PCG Facilitator and Researcher, Nael Georges, noted that current legislative and institutional provisions related to persons missing from Syria are unjust and inadequate. “A new and coherent law on missing persons is necessary in the context of a political transition and legislative reform,” he said.

The PCG was established following a conference organized by ICMP in The Hague in February 2020. It has 27 members, including representatives of Syrian family associations and civil society organizations, legal and human rights defenders, and representatives of international organizations. It is developing broad recommendations and a policy framework for a future Syrian missing persons process. The PCG has already developed several documents related to Syria’s missing and disappeared, including an Ethical Charter on Data Collection and Documentation and a UPR submission to the UN Human Rights Council.

ICMP’s assistance to the PCG is funded by the European Union (EU) through the support it provides to ICMP’s Syria/MENA program. The PCG is part of ICMP’s strategy to help lay the foundations for a sustainable missing persons process for Syria. ICMP is also actively engaged in creating a central data repository of missing persons from Syria. To date, ICMP has collected data from more than 60,000 Syrian families of the missing, including genetic reference samples for DNA testing and matching.