Myanmar: NGO calls for state to be prosecuted for crimes against Rohingya

The human rights group, Fortify Rights, has published a report on the Myanmar authorities’ campaign against Rohingya citizens in 2017, urging the UN Security Council and the International Criminal Court to prosecute Myanmar army, police, and civilian perpetrators of crimes “including murder, deportation or forced transfer, imprisonment, torture, rape, persecution, and enforced disappearance”.  https://bit.ly/2L9O3sd

The remains of more than 1,236 civilians, mostly women and children, have been found in three mass graves in the Syrian city of Raqqa, the Turkish newspaper Yeni Safak reports. The Raqqa Civil Council has led the effort to exhume the remains since the area was liberated from Da’esh in 2017. https://bit.ly/2L9JfTj

The Albanian government and the International Commission on Missing Persons (ICMP) have signed a cooperation agreement under which ICMP will help the authorities to account for an estimated 6,000 people who went missing during the communist period, Balkan Insight reports. ICMP’s Western Balkans Program Director Matthew Holliday said there was now “an exceptional opportunity for Albania to undertake this task “on foundations of human rights, respect for human dignity and rule of law.” https://bit.ly/2LoNJF5

CNN Turk reports that a boat carrying 160 “mostly Syrian” migrants capsized on 18 July. It says more than 40 are missing and “rescue missions are working between the Turkish and Cyprus coasts to rescue survivors or recover bodies”. https://bit.ly/2zR4bcF 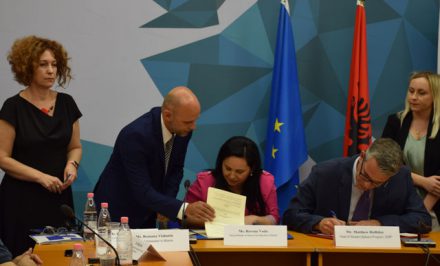 The agreement defines the co-operation between the Republic of Albania and ICMP to locate persons who went missing during the 1944-1991 period, as well as in other circumstances for which the Council of Ministers may seek ICMP’s assistance. It also defines ICMP’s legal status and functions in Albania in accordance with the Vienna Convention.

“The agreement reflects a desire on the part of the Albanian authorities to protect the rights of family members of persons who went missing, in particular by ensuring that the whereabouts of the missing and the circumstances of their disappearance are investigated effectively,” Matthew Holliday said today.

The International Organization for Migration reports that Mediterranean migrant arrivals in 2018 had reached 50,872 as of 15 July, compared to 109,746 arrivals at this point in 2017 and 241,859 in 2016. It says arrivals in Spain have overtaken those in Italy, but deaths among those attempting to reach Italy were significantly higher than among those attempting to reach Spain. https://bit.ly/2uv5Kb0

Rights groups have accused the Egyptian authorities of using a counterterrorism operation in the Sinai region as a means of targeting dissidents, according to Voice of America. The International Service for Human Rights has also accused the Egyptian government of relying on torture, arbitrary detention, and enforced disappearances to silence critics. https://bit.ly/2zPdREw

UN Secretary-General António Guterres has called on the Nicaraguan Government to end violence against demonstrators that has cost an estimated 280 lives,…

The Hague, 18 July: The International Commission on Missing Persons has expressed its appreciation to the government of the Grand Duchy of Luxembourg, which this month made a financial contribution to fund operations at ICMP headquarters in The Hague and around the world.

Luxembourg has been a long-standing ICMP supporter, diplomatically as well as financially. It played a key role, along with the Netherlands, the United Kingdom, Sweden and Belgium, in establishing ICMP as a treaty-based international organization, and it was one of the five original signatory countries to the Agreement on the Status and Functions of the International Commission on Missing Persons in December 2014.

“It is because of the goodwill and targeted practical support of partners such as Luxembourg that ICMP has been able to develop its advanced forensic and data systems capability and roll out a growing number of country programs,” ICMP Director-General Kathryne Bomberger said today. “We…

Sri Lanka’s Office on Missing Persons (OMP) has indicated it will investigate complaints regarding thousands of people who allegedly disappeared after surrendering to the military during the war against the Tamil Tigers, India Today reports. The announcement followed protests during a meeting at the weekend between the OMP and relatives of the missing. https://bit.ly/2LhwxRP

KTVQ.com, a news outlet in Montana, reports on a project to develop a database on indigenous women reported missing or found dead in the US and Canada. The Missing and Murdered Indigenous Women Database addresses jurisdictional issues, incongruences and outdated data from existing lists that fail to account for both countries. The database uses cases recorded from the start of the 1990s and as of April 2018, has recorded 2,501 cases. https://bit.ly/2JvxTU9

A mass grave has been discovered in an area where the Sri Lanka government forces and Tamil Tiger rebels were engaged in pitched battles in 2009, Sri Lankan officials said today. The Free Press Journal reports that following the discovery of the site in March, the skeletal remains of around 38 people have been found in the north eastern town of Mannar. https://bit.ly/2uqMrQh

A special magistrate in Chile has sentenced four former agents of the 1973-1990 military dictatorship to five-year prison terms for the disappearance of a member of the Revolutionary Left Movement in 1974, the Santiago Times reports. The victim, Nestor Gallardo Agüero, was one of the 119 victims of so-called Operation Colombo, to camouflage the disappearance of 119 political prisoners with the help of the dictatorships of Argentina and Brazil. https://bit.ly/2KPjpE0

The Hindu reports that Jammu and Kashmir’s Human Rights Commission has instructed police to investigate 639 cases of disappearances and submit a report within three months. Tahira Begum of the Association of Parents of Disappeared Persons (APDP) – an organization that has campaigned against enforced disappearance for 24 years – said, “The order is a milestone in the struggle of the APDP to find out the truth about the disappeared and to ensure justice for each and every person subject to enforced disappearance.” https://bit.ly/2KRSeJ0

Bosnia: the search for the missing

Oslobodenje reports on ICMP’s continuing mission to find persons who disappeared during conflict and to help bring those responsible to justice. ICMP helped to identify the 35 Srebrenica victims laid to rest in Potocari Cemetery near Srebrenica on Wednesday, with ICMP Director-General, Kathryne Bomberger reiterating that, “ICMP stands with the families of the disappeared and with all those who are fighting for truth, for justice and for reparation.” ICMP’s mission was bolstered at the London Summit of the Berlin Process on Tuesday, where participating countries in the Balkans and EU signed a Joint Declaration that renewed their commitment to support efforts to find those still missing from the conflicts in former Yugoslavia. (article in Bosnian/Serbian/Croatian) https://bit.ly/2zw0cCl

In a landmark judgement on Wednesday, the Islamabad High Court (IHC) defined the concept of enforced disappearance and declared that individuals…

Leaders of countries in the Western Balkans and EU member states participating in the Berlin Process signed a Joint Declaration on Tuesday in London reiterating their commitment to support efforts to find 12,000 persons still missing as a result of the conflicts in the former Yugoslavia. “The Joint Declaration is a key document because it upholds the rights of all families of the missing to truth, justice and reparations,” ICMP Director-General Kathryne Bomberger said after the signing ceremony, Jabuka.TV reports (article in Bosnian/Serbian/Croatian). https://bit.ly/2KRsrkc

Anadolu Agency reports that Bosnia and Herzegovina will mark the 23nd anniversary of the 1995 Srebrenica genocide by burying 35 recently identified victims in a collective funeral today. Each July 11, newly identified victims of the genocide — which claimed the lives of over 8,000 people — are buried in…

h J R
RT @PCRCBiH: During the next four days, our youth participants will hear and learn from a diverse group of experts, artists and journalists…