According to authors of new study co-authored by former police colonel Omar Rojas Bolaños and Fabian Leonardo Benavides, approximately 10,000 civilians were executed by the army in Colombia between 2002 and 2010 – more than three times the number tallied by human rights groups. Evidence of a systematic military strategy to boost body counts is laid out in the book Extrajudicial Executions in Colombia, 2002-2010 – Blind Obedience in Fictitious Battlefields. https://bit.ly/2HXDqXF

The Commission of Inquiry on enforced disappearances announced on Monday that it had disposed of 3,269 cases out of the 4,929 cases that had been brought to its attention as of 30 April. Commission Chair Javed Iqbal said in Islamabad that in the last month 50 cases had been closed. https://bit.ly/2rrNH3m

The House of Representatives…

Unidentified casualties of the battle for Mosul

The BBC reports from Mosul on the human cost of the fight against Da’esh. In the months since the city’s liberation by Iraqi government forces, rebuilding and recovery has been hampered by enduring communal divisions, while unidentified bodies of those killed in the final battle still lie in the streets. https://bbc.in/2FPsyFg

Rwanda: ways of identifying the missing

Forensic anthropologists are facing significant challenges in identifying the human remains found in four mass graves that were recently found in Rwanda. Without dental or fingerprint records, they are relying on items people may have had with them at the time of death. https://n.pr/2reOIwu

Human Rights Watch has called on the United Arab Emirates authorities to reveal immediately the whereabouts of Sheikha Latifa bin Mohammad al-Maktoum, the 32-year-old daughter of the ruler of Dubai, and clarify her…

Exhuming the remains of victims of the 1994 genocide from recently discovered mass graves in Rwanda has proved to be more complicated than originally expected, according to officials. Houses in the town of Kabuga in Western Rwanda were built on the mass graves and have had to be demolished in order to begin the exhumation process. https://bit.ly/2rk7IZs

The bodies of at least 9,000 victims of paramilitary forces have been exhumed from mass graves across Colombia since 2006, according to national authorities. More than 5,500 mass graves have been uncovered following testimony from witnesses and former Colombia United Self-Defense (UAC) groups who applied to the Justice and Peace Law, according to Mery Conejo, director of Transitional Justice of the Prosecutor’s Office. The remains of some 4,296 victims have been identified and delivered to relatives across nine departments. https://bit.ly/2HRS3Yv

Nine months after Da’esh were defeated in their stronghold of Mosul in northern Iraq it is still not clear how many civilians were killed in the battle. Hundreds of bodies belonging to civilians and Da’esh fighters have been recovered by a group of volunteers in Mosul’s Old City. https://bbc.in/2reHHuy

On 2 May, Amnesty International and Human Rights Watch called on South Sudan’s leaders immediately and impartially to investigate the enforced disappearance of Dong Samuel Luak and Aggrey Idri, two critics of the South Sudan authorities who had sought refuge in Kenya but who were abducted in Nairobi on 23 and 24 January 2017. They were subsequently reported to have been seen in the custody of South Sudan’s National Security Service in the capital, Juba. https://bit.ly/2jq9moI

Eighteen Russian citizens, eight of whom are children,… 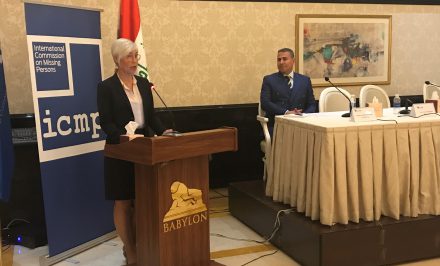 Baghdad, 2 May 2018: Addressing the issue of missing persons is central to consolidating peace in Iraq, the Head of the International Commission for Missing Persons’ (ICMP) Iraq Program, Lena Larsson, said today, adding that since a majority of those who have disappeared are male, a disproportionate number of surviving families of the missing are women who are in many cases single heads of household. “It is critical that their rights to justice, truth and reparations are secured as part of a broader process of ensuring peace and stability,” she said.

Ms Larsson was speaking in Baghdad at the conclusion of a conference on Missing Persons and the Impact on Women, Peace and Security. The conference was jointly organized by ICMP and the US Bureau of Democracy, Human Rights and Labor and was intended to highlight the intersection between the issue of missing persons and…

Rise in enforced disappearances in Bangladesh

According to a report issued on 1 May by Odhikar, a human rights organization in Bangladesh, between January and April 2018, extrajudicial killings numbered 73, nearly half the total 154 for the year 2017. This represents an increase of 15.8 percent for the first four months compared to last year. https://bit.ly/2w6XnWw

Renewed fighting in Myanmar’s Kachin State presents an escalated threat to civilians, according to rights groups. Amnesty International has warned of “appalling violations and abuses” accusing both Myanmar’s military and armed rebels of abductions, killings, use of civilians as human shields, and recruitment of child soldiers. A recent report by the UN Human Rights Council cited “credible reports” that the military are responsible for “indiscriminate or disproportionate attacks, extrajudicial killings, arbitrary deprivation of liberty, enforced disappearances,” and other abuses. https://bit.ly/2w6XZeM

Rwandans should write about the 1994…

NPR reports that four unmarked mass graves have been found about 80 feet below the surface in Rwanda’s Gasabo district, near the capital of Kigali. The first bodies were found April 22. According to Agence France – Presse, more than 200 bodies have now been unearthed. It’s estimated that some 2,000 or 3,000 people may still be buried in the mass graves, Ibuka, a genocide survivors’ organization, tells the Associated Press. The unmarked graves were located near Kigali Genocide Memorial, where about 250,000 victims of the genocide have since been re-buried. More than 800,000 people were killed within 100 days of mass murder of the country’s Tutsi ethnic minority perpetrated by the majority Hutu ethnic population in 1994. Twas, another ethnic group, and moderate Hutus were also targeted in the systematic killings, considered one of the worst genocides of…

Read more
In 1 hour, we’ll open our (online) HQ doors for a virtual open house! ICMP is taking part in #JustPeaceTheHague – from 15:30-17:25 CET, visitors can learn about our work to help #missingpersons and families, and virtually tour our #DNA lab. Register now! https://t.co/mZIBoAItJ4

h J R
Starting soon: From 15:30-17:15 CET, ICMP welcomes all to an online virtual visit to our HQ as part of #JustPeacetheHague. Learn about our work to support countries in accounting for #missingpersons and take a look at our #DNA lab. Register now! https://t.co/mZIBoAItJ4