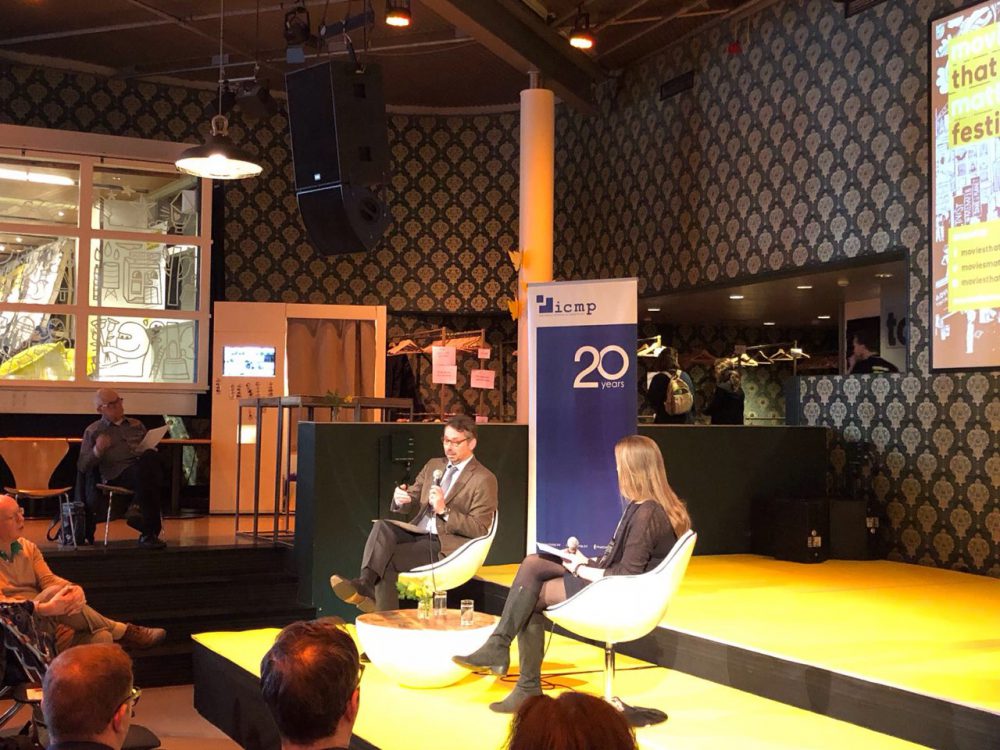 The Hague, 29 March 2018: Speaking at the Camera Justitia Masterclass today, as part of The Hague “Movies that Matter Festival”, International Commission for Missing Persons Director of Policy and Cooperation Andreas Kleiser stressed that addressing the issue of missing persons demands a rule-of law approach rather than a purely humanitarian one.

“Large numbers of missing persons destabilize fragile societies, which means that an effective program to account for the missing is a crucial component of any post-conflict or post-disaster recovery effort,” Kleiser said, adding that despite major challenges, effective programs to recover large numbers of missing can be carried out, sometimes many years after the event.

Kleiser said an effective strategy involves working with governments to establish legislative and institutional structures, working with civil society to ensure that the rights of families of the missing are secured, including rights to effective investigations,…

In its first report presented on 28 March at the UN in Geneva, the head of the UN International, Impartial and Independent Mechanism (IIIM) on crimes in Syria says that war crimes investigators have collected an “unprecedented volume of information” documenting atrocities committed by all sides in the Syrian war. Catherine Marchi-Uhel added that by coordinating effectively with national jurisdictions, civil society and other international actors, the IIIM can play a role in promoting a more comprehensive accountability strategy for Syria, recognizing the combined role of multiple jurisdiction in ensuring an appropriate measure of justice. https://bit.ly/2Gh1bt1

Nepal’s Prime Minister KP Oli has stated that the transitional justice process in Nepal will not include any amnesties for serious human rights violations. Observers note that this would mean amending transitional justice legislation in line with the Supreme Court judgment of 2015,…

The ship’s captain, head of the mission and operations officer of the Proactiva Open Arms NGO have been charged by judicial authorities in Sicily with people trafficking after they refused to transfer more than 200 people they had rescued, well beyond Libyan waters, to Libyan custody. The principle of “non-refoulement” means that refugees and migrants cannot be forced back to a place they are fleeing from. https://bit.ly/2E0BcQy

Members of Tunisia’s parliament have voted not to renew the mandate of the Truth and Dignity Commission, which expires in May. Opponents say there was no quorum for a vote. Amnesty International urged legislators not to obstruct the commission’s extension. “It will be virtually impossible for the Truth and Dignity Commission to finalize its work in the next two months,” Amnesty said. “Parliamentarians are bound by law…

Finding the missing from Damascus suburb

Following the capture of the Damascus suburb of Ghouta by government forces, evacuees are searching for missing loved ones. Since the beginning of the Syrian conflict, tens of thousands of people have gone missing. Both regime forces and opposition factions have been accused of indiscriminate attacks on civilians. As part of the evacuation deals reached for Ghouta, rebels have released just 21 people, including civilians and soldiers, in recent days. https://dailym.ai/2IVtYRt

A senior official in Kenya’s Coast Province has dismissed allegations that army personnel have been involved in extrajudicial executions. Commissioner Oning’oi ole Sossio said that claims by a group called Muslims for Human Rights that Kenyan Defense Forces personnel executed residents in the town of Garsen, on the west bank of the Tana river, were “malicious”, and blamed the militant group, Al Shabaab, for the killings….

Identifying victims of the Da’esh occupation of Mosul

After taking control of Mosul in 2014, Da’esh militants disposed of the bodies of victims in a sinkhole, locally known as Khasfa. Before the Da’esh withdrawal from the area, the sinkhole was reportedly surrounded by explosives to prevent the recovery of the bodies. According to the International Commission on Missing Persons (ICMP) the government has yet to set up a database of people who are presumed to have been killed by Da’esh in Mosul, making it impossible to identify the bodies in the grave. Without this preparatory work, there is little point in exhuming the corpses, experts say. https://bit.ly/2pHib0p

Iraqi security forces say they discovered a mass grave near a river in Diyala province northeast of Baghdad on Saturday and the remains of five people have been found. https://bit.ly/2pDkaTk

The International Organization for Migration (IOM) reports that 13,043 migrants and refugees have entered Europe by sea through the first 80 days of 2018, with about 47 percent arriving in Italy and the remainder divided between Greece (30 percent) Spain (22 percent) and Cyprus (less than 1 percent). Worldwide, IOM’s Missing Migrants Project has recorded 782 migrant fatalities in 2018, compared with 1,200 at this time last year. In the Mediterranean alone, 497 migrants are estimated to have died this year. Most recently, the remains of a migrant were recovered on 18 March from a beach in Rota, Spain. In the past month, three bodies which are not associated with any known incident have been found in this area. These deaths add to the growing list of people who have died trying to cross the Mediterranean to reach Spain this year. https://bit.ly/2pzBIAB

Armed groups execute and torture civilians in Libya with almost complete impunity seven years after the revolution that toppled Muammar Gaddafi. Libyans and migrants are often held incommunicado in arbitrary detention in appalling conditions, and reports persist of captured migrants being bought and sold on “open slave markets”, the UN human rights office says in a report to the Human Rights Council. http://reut.rs/2ucJVQ0

Amnesty International has expressed alarm over an Associated Press report that Iraqi authorities have detained or imprisoned at least 19,000 people accused of links to Da’esh or other terror-related offenses, and sentenced more than 3,000 of them to death. Thousands have been arbitrarily arrested, forcibly disappeared, and routinely subjected to torture and horrific conditions in detention, Amnesty says. http://bit.ly/2G1NeLp

Although rights groups say that…

More than 700 reports of disappearances have been received by the UN Working Group on Enforced or Involuntary Disappearances from Pakistan, and hundreds more have been reported to Pakistani authorities, “but nobody has ever been held accountable for an enforced disappearance in the country”, Amnesty International says. It says victims include “bloggers, journalists, students, peace activists, and other human rights defenders whose work promotes the same values as this Council and is crucial to a free and just society.” Amnesty warns that the disappeared risk torture and even death, and describes forced disappearances as “a tool of terror.” http://bit.ly/2HO7U9S

The majority of the Nigerian schoolgirls kidnapped by militants from the town of Dapchi last month have been returned, the government says. Nigeria’s Ministry of Information says 76 of the 110 schoolgirls were brought back in the early hours of Wednesday following…

Victims of arbitrary detention in government-controlled secret prisons in eastern Ukraine face new, serious obstacles to justice, Human Rights Watch and Amnesty International said today. At least five detainees held in secret facilities run by Ukraine’s Security Service (SBU) in 2015 and 2016 filed complaints against the authorities for their enforced disappearance, torture, and other ill-treatment used to extract forced confessions, and subsequent unlawful detention. “People held for months in Ukraine’s secret detention sites endured serious abuse,” said Tanya Cooper, Ukraine researcher at Human Rights Watch. “Almost two years later, facing a wall of denial from the authorities, they are as far from justice as when they were detained.” http://bit.ly/2u25a75

ICMP’s laboratory system in The Hague is operational

The ICMP laboratory system in The Hague became fully operational this month and all the samples received from BiH have been delivered to ICMP for processing….

Nepal: reparation for the families of killed and disappeared

Three years after its formation, the Nepali Truth and Reconciliation Commission (TRC) has started talks with victims of the conflict and human rights activists on a reparation policy. Although families of victims from the the decade long insurgency that ended in 2006 have received cash support of just under 10,000 USD, no other reparation has been provided. The TRC formed a committee two years ago to establish a reparations policy, this has not yet been finalized. Conflict victims argue that reparations should be based on UN Basic Principles and Guidelines on the Right to a Remedy and Reparation for Victims. http://bit.ly/2FKHXvu

The UN Support Mission in Libya (UNSMIL) has convened a two-day meeting in Tripoli on “Knowing the Fate of Missing Persons in Libya: A Condition for Meaningful Reconciliation,” aimed at exploring best ways…