Argentina has sentenced 29 people, some with nicknames such as “Blond Angel of Death” and “The Tiger”, to life in prison at a trial involving some 800 cases of kidnapping, torture and murder during the 1976-1983 dictatorship. Hundreds of people gathered outside the federal courthouse in Buenos Aires listening to the convictions, which took more than three hours to read. http://reut.rs/2zR1SpC

Two former Argentinian military pilots have been given life sentences for their part in the death of a close friend of Pope Francis, who was hurled to her death from an aircraft during the country’s 1976-83 dictatorship. The ruling on Wednesday marked the first Argentinian judgement against participants in the so-called “death flights”, in which opponents of Argentina’s military regime were thrown into the freezing waters of the South Atlantic in an attempt to hide…

Colombia’s lower house has approved a bill to regulate transitional justice under the 2016 peace deal, including special tribunals that will try FARC leaders for war crimes. The lower house made changes to the text agreed this month by the Senate, so the bill must now go for conciliation between the two chambers. The FARC has argued against any changes to the original agreement. http://bit.ly/2j1TCbY

Skeletons found on ‘ghost ship’ washed up in Japan

Japanese authorities are trying to identify eight people whose badly decomposed remains were found on a wooden boat that washed up on a beach. Crew-less boats or vessels with bodies on board, known as “ghost ships” and thought to be North Korean fishing boats, regularly wash up in Japan. http://bbc.in/2AEiSiL

More than a dozen men have disappeared without a trace during Russia’s annexation of Crimea, according…

Members of Guatemala’s Congress have introduced a proposal to give blanket amnesty to members of the military accused of committing war crimes during Guatemala’s 36-year-long internal armed conflict. This comes as the Guatemalan Attorney General’s office continues to pursue cases against former military leaders for crimes against humanity. The amnesty proposal seeks to reform the National Reconciliation law passed just prior to the signing of the Peace Accords in 1996. The civil war in Guatemala led to more than 200,000 deaths and the disappearance of more than 40,000, according to findings by the UN backed Commission for Historical Clarification (CEH). Families affected by these campaigns of forced disappearance and killings during the war have strongly denounced efforts to reform the law. http://bit.ly/2jrxKGi

Extrajudicial killings after liberation of Mosul

The Guardian tells the story of the final days of the battle for Mosul, and a new wave of savagery that was unleashed at its conclusion. According to the testimony of Iraqi soldiers, extrajudicial killings were commonplace. http://bit.ly/2A7XVM2

A mass grave containing remains of 98 Yezidi victims has been found in Nineveh province in northern Iraq. Brig. Gen. Mohamed al-Shemari, of the Iraqi army said troops discovered the mass grave in the town of Baaj, west of Mosul. Tens of victims, executed by Dae’sh members, have been found there, he said. http://bit.ly/2zJ8G8D

Journalists being “disappeared” in Myanmar

Reporters working in Myanmar’s Rakhine state to document atrocities against Rohingya have gone missing, raising fears that they have been deliberately targeted by the military. Young Rohingya volunteers had been secretly reporting in Myanmar since 2012. Human rights groups claim…

Search for the missing continues after Ratko Mladic verdict

Against the backdrop of Ratko Mladic’s conviction at the International Criminal Tribunal for the former Yugoslavia, Matthew Holliday, the head of the International Commission on Missing Persons’ Western Balkans program, has explained that ICMP’s pioneering use of DNA technology has led to the identification of around 70 percent of the 40,000 people who were unaccounted for after the conflicts in former Yugoslavia. Holliday adds that ICMP staff provided expert testimony in more than 30 cases at the ICTY, including the Mladic trial. http://bit.ly/2hNedj5

A top UN official has called on the Iraqi government to speed up investigations into allegations of human rights violations committed by security forces during the fight against Da’esh and to make the results public. Agnes Callamard, the UN’s special investigator on extrajudicial executions, has stressed to… 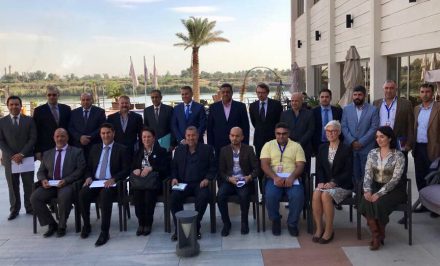 Baghdad, 23 November 2017: In Baghdad today, ICMP convened a meeting of the Working Group on Data Processing and Protection, focusing on steps that can be taken by Iraqi stakeholders to improve the legal framework supporting efforts to account for the missing. The Working Group brings together representatives of ministries and other government agencies and institutions in Iraq that have a public mandate to address the issue of the missing.

Today’s meeting examined personal data processing in the context of Articles 19 and 20 of the International Convention for the Protection of All Persons from Enforced Disappearance (CED).

ICMP’s Director of Policy and Cooperation Andreas Kleiser presented internationally recognized principles relevant to efforts to investigate the whereabouts of the missing and the circumstances of their disappearance. He invited the group to meet again for further discussion of proposals for legislative reform that…

The International Criminal Tribunal for the Former Yugoslavia (ICTY) has convicted ex-Bosnian Serb military commander Ratko Mladic of genocide and crimes against humanity. The ICTY found Mladic guilty on 10 of 11 charges, including the slaughter of 8,000 Muslim men and boys at Srebrenica and the 43-month siege of the Bosnian capital Sarajevo, in which more than 10,000 civilians were killed by shelling, mortar and sniper fire. Mladic was hustled out of the court minutes before the verdict for angrily shouting, “This is all lies, you are all liars!” http://tmsnrt.rs/2hLJaEf

Nepal: Prime Minister to give testimony on enforced disappearances

The Commission of Investigation on Enforced Disappeared Persons (CIEDP), one of the two transitional justice mechanisms in Nepal, is preparing to summon Prime Minister Sher Bahadur Deuba to record his statement on the charge that the state of emergency imposed during his tenure as prime minister during…

The International Criminal Tribunal for the former Yugoslavia hands down its verdict on Wednesday in the trial of Ratko Mladic, who is accused of ordering the massacre of 8,000 Muslim men and boys at Srebrenica, as well as crimes against humanity over the siege of Sarajevo in which 11,000 civilians died from shelling and sniper fire. Munira Subasic of the Mothers of Srebrenica group recalls how Mladic was filmed after the fall of Srebrenica telling women and children that nothing would happen. “After the cameras left he gave an order to kill whoever could be killed, rape whoever could be raped and finally he ordered us all to be banished and chased out of Srebrenica.” The remains of Subasic’s son Nermin and husband Hilmo were both found in mass graves by the International Commission of Missing Persons. ICMP has identified some 6,900…

As Mladic awaits verdict, Bosnians still search for loved ones

On Wednesday, the International Criminal Tribunal for the former Yugoslavia (ICTY) will hand down a verdict in the case of Ratko Mladic. Prosecutors say Mladic played a pivotal role in a ruthless campaign of ethnic cleansing during the 1992-95 conflict in Bosnia and Herzegovina. In total, the Bosnian conflict left some 100,000 people dead and around 7,000 of them are still missing. The effort to find their bodies is hampered by the fact that the killers scattered the remains. A laboratory set up in 1996 by the International Commission on Missing Persons has succeeded in identifying 70 percent of the 40,000 missing from the 1990s Balkan conflicts. More than three-quarters of those who disappeared were from Bosnia. http://bit.ly/2Aj3CYF

Why do so many Indian children go missing?

According to India’s Ministry of Women and Child Development, 242,938 children disappeared between 2012 and…

Almost half of the more than 6,000 Yezidis kidnapped by Da’esh three years ago have still not been found. Yet many are hidden in plain sight, aid workers and Yezidi activists say, living with Arab families who have sought refuge in refugee camps. Forced to convert to Islam, they now fear for their lives if they are found, according to aid worker and Yezidi activist Mirza Dinaye. “We know they are completely assimilated into the Muslim community,” he says. “They think the Yezidi faith has been eradicated, and often suffer from Stockholm syndrome.” http://bit.ly/2hEos9t

Identifying the missing in Bosnia

Forensic anthropologist Dragana Vucetic collects DNA samples from the bones of people killed in eastern Bosnia during the war, including in the 1995 Srebrenica massacre, and reassembles their skeletal remains. Vucetic’s employer, the International Commission on Missing Persons, has pioneered a DNA-based identification system. Through…

h J R
“Authorities have a legal obligation to account for missing persons - state responsibility & state action are essential. ICMP’s work around the world demonstrates that #missingpersons can be accurately identified in line with the #RuleofLaw, even decades after disappearances.”